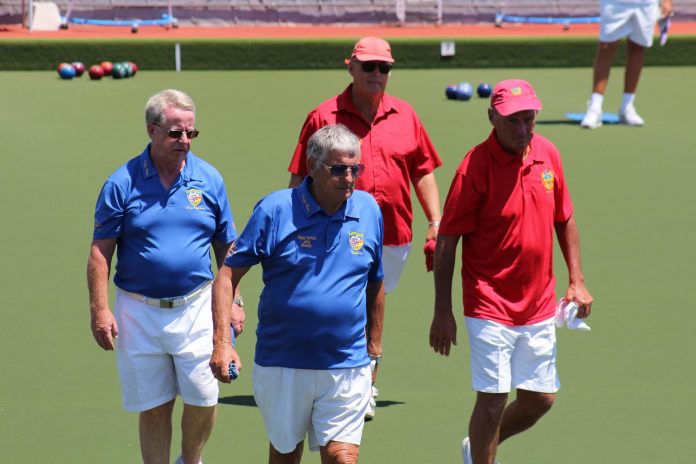 WINTER LEAGUE. Vistabella at home v El Cid, wins on three rinks and down to the last end to decide the overall shorts.

Check the boards in the office for information on the club competitions, Christmas Dinner, and Christmas appeal.

Club Mornings are proving popular, Sundays, Tuesdays and Thursdays 0945 for 1015.

WASPS on Wednesday afternoon 1.30, a great afternoon for anyone wishing to try their hand at bowling. €5 for bowling, woods, shoes and tuition if required.

The 4321 was played over two Sundays 9th and 10th October with six teams of five bowlers in each team. After a good mornings bowling the cup was won by Dave Melville, Mike Farrelly, Alan Ashberry, Bill Young and Jan Gatward.

What an exciting game and enjoyable start to the new season. Both teams enjoyed some very close matches in the sunshine producing very good bowling. Both teams won on three rinks the Toreadors won the overall shots 99 – 97, winning 8 points to 6.

Thursday 20th October we played against Fleet United Bowling Club, a touring team from England. Although we had a shower half way through the game it didn’t dampen our spirits. A lovely day with lovely people finished of with a enjoyable meal at the Rincon restaurant.

Beryl Styring, Alan Barton and Alex Morrice and Joy Gardiner, Bill and Sue Jordan had convincing wins with the latter triple nearly getting a hot shot by scoring an 8 .In a close encounter Irene Mangan, Barbara and Jack Cooper won by a single shot.

Tuesday Touring side Burgess Hill visited and in match with rinks shared equally La Siesta came out narrow winners on shots scored. This was a most enjoyable encounter which both sides finished with a lovely lunch supplied by our green owners Jim and Lynn.

10-2 defeat at home to Montemar by 96-77.With 5 ends remaining the overall shots were level but our visitors pulled away. The consolation victory was achieved by Sheila Chorley, John Taylor, Sue Jordan and yours truly by 29-15.

The Bluess had an excellent home win against Quesada winning 117-89 and obtaining 12-2 in points.

Top Rink was Dawn Taylor,Harold Charleton and Pat Reilly winning 27-16. Two rinks were won by the odd shot 16-15 on the final end and thanks to Barbara Cooper getting a single on the last end to win and similarly skip Brian Harman who rescued his rink when defeat loomed.

The Discovery and Enterprise Leagues started this week with good results for both our teams.  The Pathfinders played San Luis Romulans and won by 5 rinks to 1. John Withers, Maggie Sadler and Martin Butler won 22-17. Colin and Lynn Armitage plus Chris Green won 19-11 while John Morgan, John Rae and Mo Taylor had a closer fight to win 19-17. Don Harrison, Peter Bailey and Angie Butler kept it going with 24-15 win.  Barry Sadler carried on his winning ways with the help of Dave McGaw and the indefatigable, Mo Barker with a score of 30-7. The President didn’t fare so well but it was a close game.

Another resounding result came from the Explorers when they played Greenlands Maples and won 10 – 4. The two all-girls rinks (sorry ladies) did very well indeed.  Shirley Hadaway  (fresh from her cruise) plus Margaret McLaughlin and Janet Parsons won 28-7.  Not to be outdone, Margaret Finlayson, Kathy Manning and Hilary Cronk had a nice 28-12 score. Dave Hadaway cruised along with his other two crew of Jim Reeves and Garth Slater to pull into port 25-10 winners.  Alex Whyte, Rob Finlayson and Ron Maiden kept the good work going with a 21-10 win.

Second game, second loss for the Winter League with the same score as last week as well. The only winning rink this week was Maureen Kidd, John Rae and Lynn and Colin Armitage.

The Sharks have begun the season the same as the Winter League with another loss. This time against the Quesada Swallows 2- 12. The winning rink being Margaret McLaughlin, John Mallet and Dave Lewis.

Seagulls flew over to San Miguel for a fine win of 9-5. Steve Douglas, Steve Hindle and Len Daniels pulled off a great draw with it going to the last end. Sue Daniels went one better than hubby and won 17-16 helped by Berni Carr and Ann Stone. Terry and Jean Perchard plus Gina Hindle had a convincing win of 23-11. Finishing last as usual was the rink of Barbara Forshaw, Wendy and Barry Latham winning 23-15.

In the Enterprise Division, The new season kicked off with the Maples at home to La Marina Explorers. Not a great start to the season winning only 2 rinks and losing on 4 but I am sure we all gave our best. Final scores were – Total shots for – 82.  Total shots against – 125.  Points for – 4.  Points against – 10.

On Tuesday we were hosts to Blackrock Bowls Club all the way from Dublin, everyone had an enjoyable Mornings bowling so thanks to them for being such great sports, final result was an honourable draw.

In the Winter League we travelled to La Marina, the weather started off with a threat of rain but failed to dampen the spirits. The final score was as follows……….Total shots for – 88  Total shots against – 64.  Points for – 10.  Points against – 2.

The week started with the Emerald Isle playing the visiting St James gate club from Dublin in the 3rd annual meeting the Isle took the game by winning all 3 rinks taking the shots 59-44 and making the score now 2-1 to the visitors. We are now looking forward to their visit next year, they are a very talented set of bowlers who also like the odd beer or two

Radlett visited EI on Tuesday. After a good game enjoyed by all home advantage won the day, but hopefully the opposition will return again next year

Friday saw the Cavaliers travelling to Mazzaron and they come away with a very creditable win 9=5  and an aggregate of  117=104.

On Friday morning the Claymores took on La Manga and had a fine 14=0 win and an aggregate of 187=55, well done all 6 rinks and the friendly which EI won as well

In the afternoon Emerald Isle Outlaws took on El Rancho Raiders and won 5=1 on rinks aggregate 138=72, giving them a 12=2 win

Monday found The Raiders playing their opening match of the season at Mazarron against The Mariners, which is always a tough fixture. But they played well and although some rinks were quite large margins, they came away with 2 rinks, which is always a good result away from home.

Meanwhile The Pintos were entertaining San Miguel Comets and took full advantage of the home mat, to take 5 rinks and the overall shots against a strong team.On wednesday we played host Burgess Hill BC and found ourselves in great company, a team just enjoying their bowls in good humour. As always against touring teams the home team has a huge advantage, so making the result immaterial, just great fun for all. Shirley made a great job of the organisation and the food matched the company. A good day all round!

Friday brought The Cougars from San Miguel to play The Mustangs, several of whom had been with us on Monday. We had a lovely morning, having not bowled on the wet mat in quite some time, so Thursday’s storm provided us with some real fun. The home team on any mat will of course have the advantage and The Mustangs took full advantage to take the rinks by 5 to 1 and the overall shots, always a good result against any San Miguel Team.  Judy Foley, Keith Cunningham and Geoff Jones 16-12. Barbara Jones, Sheila Cooper and Carolyn Harris 34-13. Maxine Wright, John Skipper and Rod Wright 30-14. Henry Ryder, Jan Bright and Richard Lee 12-17. June Whitworth, Malc Sykes and Jim Gracie 20-14. Eddie Thomson, Merv Armstrong and David Whitworth 42-8.

In the afternoon The Raiders travelled to Emerald Isle to play The Outlaws and although they may have been a little disappointed at the result, it is only a game, the result is not as important as playing and enjoying the company. Edward Elsam, Tricia Elsam and Shirley Edwards 10-27. Peter Blackburn, Terry Buswell and Keith Longshaw 5-33. Pam Harris, Diane Yates and Brian Harris 13-22. Marion Haynes, Graham Day and Dave Haynes 21-13. Bob Easthope, Ron Edwards and Rob Clark 15-20. Ngaio Baldwin, Peter Baldwin and Malc Elmore 8-23. For membership details contact Brian Taylor on 965077093 or at briantaylor_es@yahoo.co.uk or Carolyn Harris on 966774316 or at elranchobowls.secretary@gmail.com

The winter season is under way and Geckos kicked off proceedings with a visit to Quesada on Friday 14th October, a creditable result with 3 winning rinks and 3 losing rinks, losing the long game. Club Captain John Rimmer, supported by Audrey Holliman and Jean Turner the best of the bunch with a 16 -11 win.

On Monday the Flamingos welcomed the visitors from La Siesta and could not quite match the visitor’s game with only 2 winning rinks. Again Club Captain John Rimmer assisted by Brian Ray and Jean Turner came up trumps with a 28 – 5 win, Club President Peter Dix supported by Derek Jiggins and Keith Holliman collected a further 2 points with a 20 -18 win.

Next it was the long trip up to La Marina on a damp and cloudy Friday morning for the Geckos, achieving a fine victory in a close contest with 2 of our rinks picking up wins with the last bowls and one gaining a draw to collect 9 points to the home sides 5. Team Captain Trish Dix supported by Brenda Jiggins and Pat Emmett were the main stay with a fine 21 – 14 shot victory.