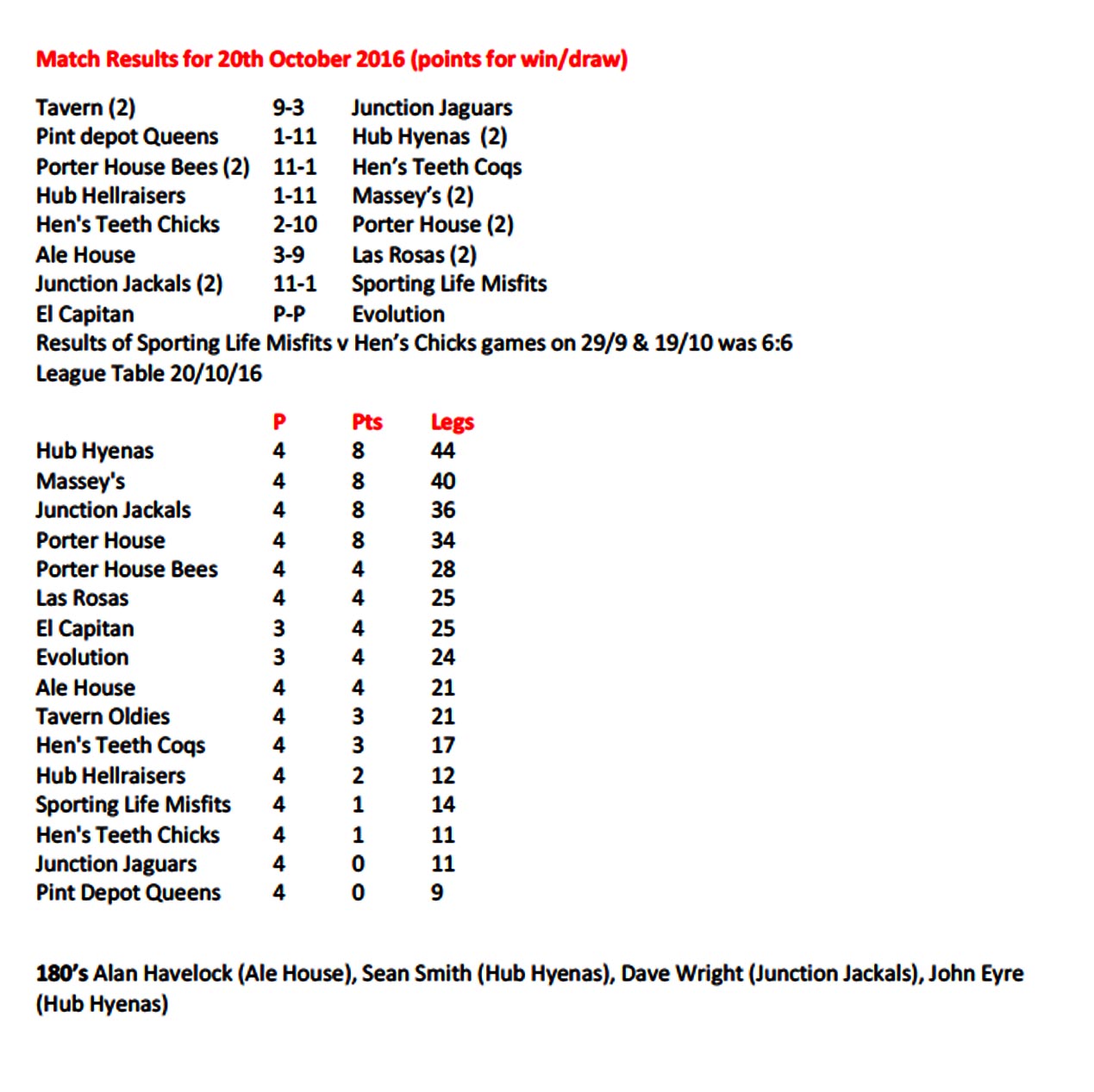 Porters report on the triples: -Porterhouse thought they were without 2 key players at the start, Ray Hayes away in Monaco representing Wales (Petanca, not darts) and Sid Cross eating out with the family to celebrate his birthday. However, Sid arrived just in time for the start having rushed to eat his 5lb dish of jellied eels in order to get to the match and not let his team mates down. Sid teamed up with Pete Ayres (Tufty) and Yvonne (Roofrack) for the first treble and made short work of defeating Henni, Val and Jan with Pete finishing on D13.

The second treble was a different matter with the Chicks, Audrey, Mags and Winnie outclassing Graham Todd (Toddy), Brian Nash (Nashy) and new comer to the team Jeff (Cocky) Ward. Mags for the Chicks finished on D8. The third treble saw the Chicks trio of Audrey, Mags and Winnie take on Pete, Yvonne and Captain Ray Sanderson. This was a higher scoring game than the previous 2 with the Porters winning with a D8 finish by Yvonne who had scored a great 140 along the way.

Chicks eye view of the pairs: –
It was a slow start for both teams but Toddy got a 95 and a Siddie, full of eels, scored 81 and 93 leaving the Porters down to a manageable. Toddy whittled this down to leave Sid with 60 which he put away with a S20 -D20. Mags’ 68 and Levi’s 57 couldn’t save this leg. Chief-Chick Winnies feathers were ruffled and she took her 2nd pairing ahead with a score of 100 but the Porters then took the lead and were first at the double needing D4 for the leg. Unfortunately, the chicks only needed 41 which Winnie put away with a S19-D11 to bring the score to 3:2.

In the third pairs game, Peter started with 100 and Yvonne rolled with 85.   Jan hit 66 and the aptly named Henni plucked a 51.  When Roofrack hit a 7 the Chicks thought they were back in the game but alas with Roofy and Tufty back on form (100, 100, 115) the league’s leading lady checked out with a D8

At half time with the score at 4-2 in favour of Porter House, the match was certainly not over for either team. Chicks had already shown the Porters that they are capable of pulling off some surprise wins. The break for food and refreshment at the interval was welcomed by all. The food supplied by Hen’s Teeth was great and appreciated by all (except Sid, who was still full!). During the interval Sid continued to practice and believe it or not recorded 2 x 180’s in succession. Note: there will be jellied eels supplied for the Porters players prior to all future matches! 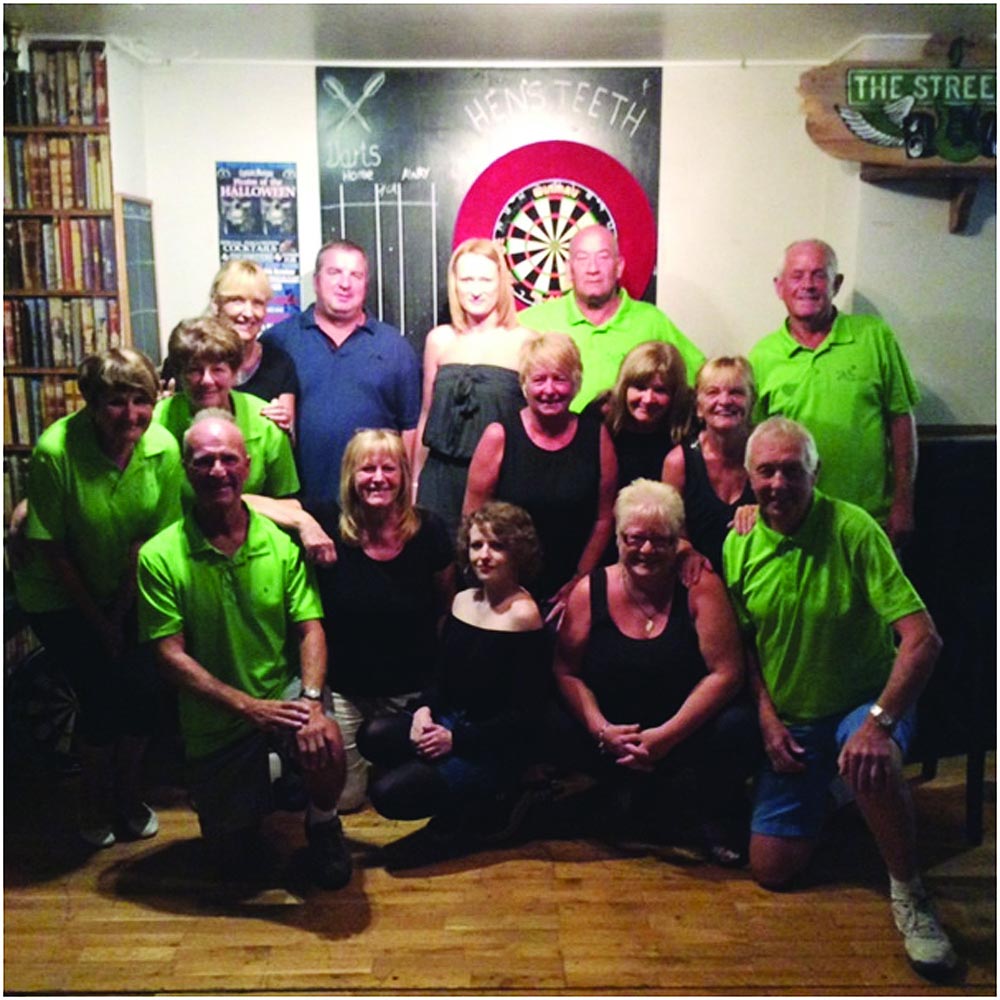 The singles as seen from both sides: – Game 1 saw a nice 95 start by Henni but Sid replied with 85. Henni continued to play well as with 91 left, she hit 71 leaving her on D10.  However, Sid, true to form hit a 125 to leave him on 20 which he took the long way round checking out on S10-D5. Game 2 paired Chick’s Jan with Porter’s Brian. In a close game Brian took the honours with a D10 finish.

With the match score now at Chicks 2, Porters 6, the third singles saw Mags take on Pete. At this point Porter House still needed 1 more win to be sure of match success. Pete didn’t let his side down with some high scoring and a fast D8 finish. In the 4th game, a consistent Levi scored 81 so the game was on but Toddy came back with a score of 121 and 92.

He sealed the deal and the match with a  d4  on the next throw. Porters newcomer, Cocky Jeff, followed on in similar fashion with some high scoring (incl a 160) to take the 5th single against Chick Winnie who also showed us some great scores along the way. Finally into the 6th and final single and Porters Yvonne who had been their most consistent high scorer comfortably beat Val including a 140 and 56 finish (16, D20) so well deserved her nomination as MOTM for the Porters.  Equally, is was a clear choice of Winnie for the Chicks.  Final score 2:10.

Porter House darts team wish to record their thanks to the Hen’s Teeth for hosting a fun evening with great food.

Cup cheer for Courtyard A

Gold and silver for local gymnasts

Top places for Mojácar riders at the Andalucían Dressage Cup

How To Have The Healthiest Lawn In The Neighborhood