It came as such a shock on Thursday to learn of the death of our good friend, the Costa Blanca’s Mr Golf, Ivie Davies.  All our thoughts are with Diane and her family at this awful time.

Ivie and Diana married in 1980. They moved to Spain from the Smethwick in the West Midlands in 1996 where Ivie quickly became involved in local golf. At that time of course there were few expat societies around so it was no surprise when Ivie became involved in the Torrevieja GS. He almost immediately assumed the role of secretary, a post he enjoyed for over 9 years, and his enthusiasm and his professionalism quickly established it as the foremost society in the region. 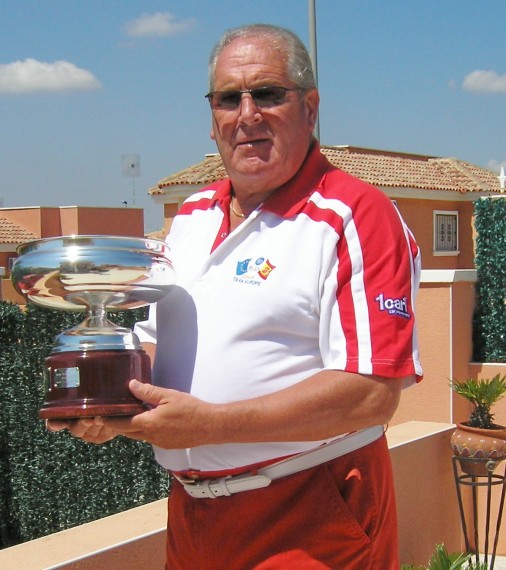 As all that knew this lovely man will confirm, Ivie absolutely lived for golf.

Over the years he wrote many articles for expat publications on the subject and he also enjoyed time as a radio presenter where golf was at the forefront of the programmes he presented.  He never had any problem attracting big names onto his show and over the years Miguel Angel Jimenez, Graeme Storm, Richard Boxall, Johann Cruyff, Terry Mancini, Ronnie Whelan and Steve Davis all found themselves sharing a studio with him.

Ivie became the ambassador of the PGA Europro Tour here in Spain and he brought the competition finals to these shores on two occasions when nobody thought it was remotely possible, first in 2004 when it visited Mosa Trajextum and again in 2011 when it was hosted by the Mar Menor. Both events were extensively broadcast on Sky Sports.

In 2000 he was responsible for the formation of the Vega Baja Golf League which now enjoys such popularity up and down these shores. Ivie continued in the role of secretary until his tragic death.

Ivie was also a great friend to many golfers; he was always available to offer encouragement and advice and during the last few days the many posts on social media sites bear testament to  the great man’s popularity.

Im sure that even now, as he looks down on us all, he will already be running the ultimate golf society up above, and as he walks down heavens fairway with Seve, Arnie and the like, he will already be sharing his many anecdotes with them, whether they want to listen or not.

Ivie, you were a lovely man and the game of golf on the Costa Blanca is now much worse off because of your passing.

Rest in peace my friend.

Note: The funeral will take place on Tuesday 25th at Rojales at 2pm and then to celebrate his life at A.J s on El Raso at 3pm. No flowers and any donations to Pancreatic Cancer Research.