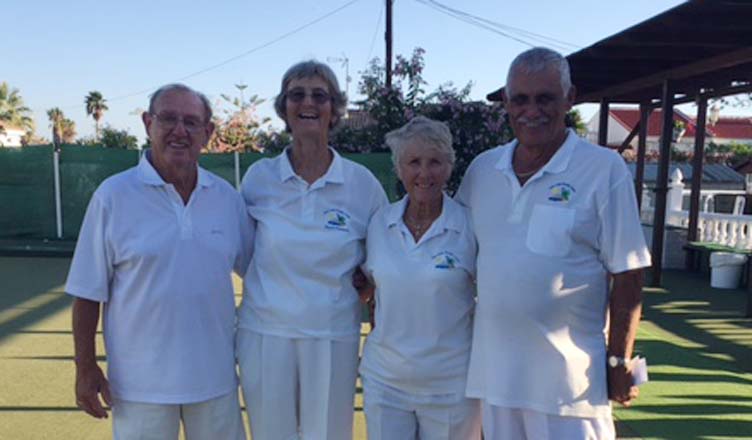 Following this excitement was the San Luis 4-2-2 OPEN (from 9th -11th).  As usual all the matches were hard fought through the group stages with several going to the last match to decide the group winner.  The semi-finals were played off between (A) Keith Jones’ SL team v (B) Brian Zelin’s MM team and (C) Doug Beattie’s SL team v (D) Eric Bishop’s VB team. Again the 4’s, ladies pairs & men’s pairs were closely contested but eventually, after all the twists and turns, the final was played off between Keith Jones, Colin Lindgren, June Jones & Sheila Cammack v Eric Bishop, Charlie & Lin Watkins & Lynne Bishop, with San Luis coming out as the winners.

On Wednesday12th our Winter League team was away at Quesada. This was obviously going to be a real battle for points and so it proved until the last bowls were played. Points 6-6, shots 79-92. Winners: Irene Everett, Lynne Morris, Peter McEneany, Tom Hill 23-16, Pam Lockett, Neil Morrison, June & Keith Jones 19-13, Shirley Verity, Steve Simmons, Jules Pering, Russell Marks 24-7. At the end of all the hard work we enjoyed Quesada hospitality and an excellent carvery meal together.

There was a very tense moment when our team were four shots ahead going into the last end, San Miguel were holding four and with his last bowl Bill drew the perfect shot, there was a very loud cheer from the Vistabella supporters, a very exciting game to watch. Martin & Bill also won through to the final of the Men’s Pairs, and again they were head to head with Chris Collier & Stuart Denholm only on this occasion they came runners up. Maggie Furness & Ian Kenyon came second to the Quesada Mixed Pairs of Carol Broomfield and Jason Prokopowycz and Lin Watkins & Carol Thorpe were also runners up to the Quesada Ladies Pairs Peta Rhodes & Carol Broomfield but well done to all of our players for doing Vistabella proud. 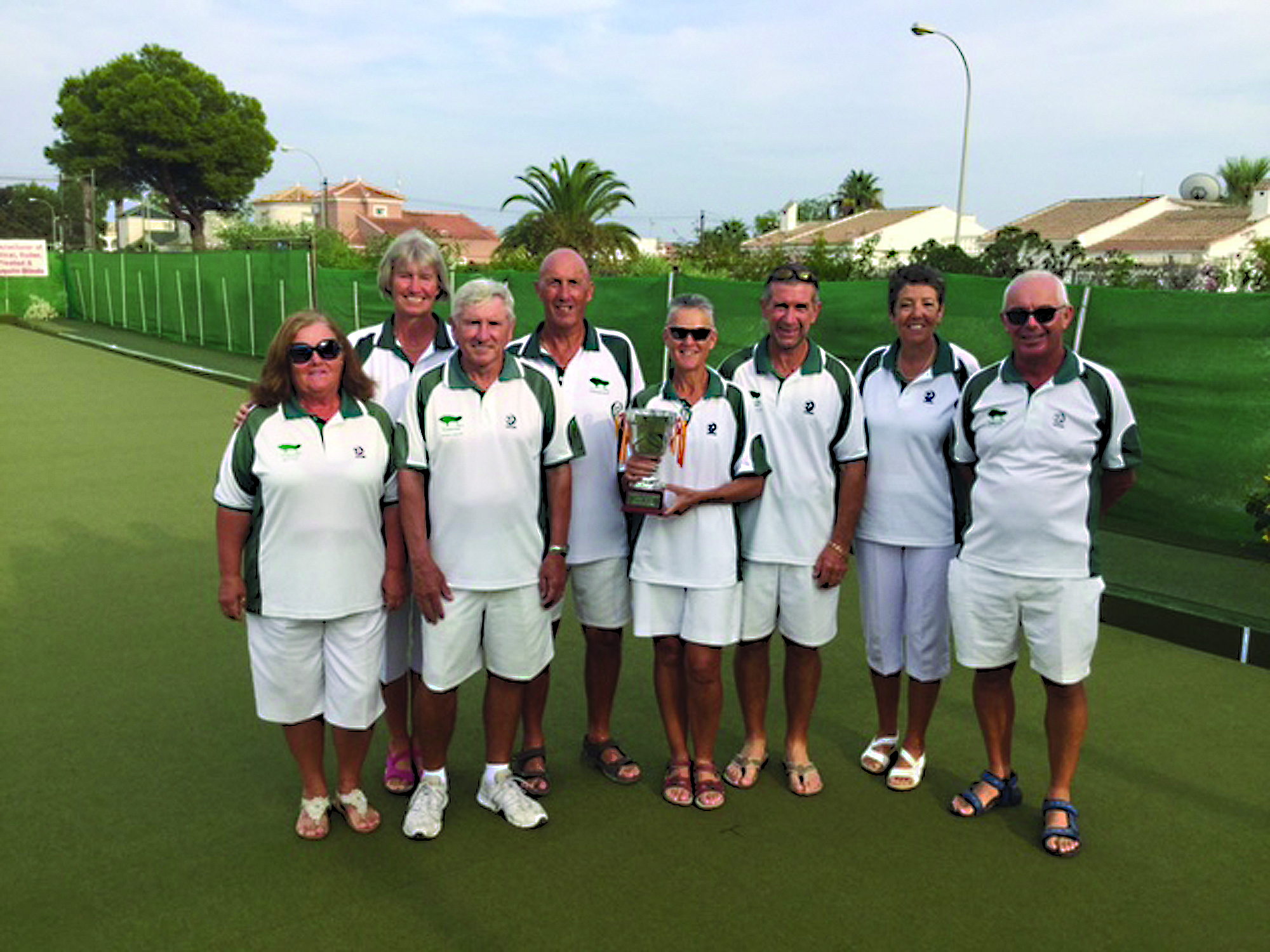 For all the results & tables go to the website…

Saturday brought the finals of the Valencian tournament to a close and the Emerald Isle were very pleased to have the Men’s Singles Champion in Frank Close. Well done

As a club we had a much greater representation this year than of late and all the players put up very commendable performances in their disciplines. It all bodes well for the clubs future

We now return to normal with Wednesday seeing Javea Green playing at the Emerald Isle in the winter league and Berleen with the results going the way of the visitors. In a very close fought game Javea won 8-4 but the aggregate was 83-84

Emerald Isle Roundheads hosted a home game against EI  Outlaws in the afternoon with the Outlaws on top 12-2, aggregate of 114-81

20 members attended on Saturday Result of roll up as follows.    1st Heather Meason  23 points, 2nd after a three way count back Rudi Wattley  3rd was Tony Hodges with the fourth spot going to Vic Young, the sought after wooden was won by Zoe Wilcox who has just returned to us with husband Jim from the UK . Timings for Saturday is 0930 for 1000 hrs sharp and we look forward to all members attending future Saturday’s. On Sunday we were visited by The Dolphins Bowls Club all the way from Poole in Dorset, The weather was sunny with a little cloudy which cooled things down a bit. The bowling was competitive but played in a friendly spirit and was enjoyed by everyone. On Tuesday our visitors were Hemel Hempstead B.C. and once again a good days bowling was enjoyed by both teams in wall to wall sunshine.

Looks like I got lumbered or something like that to do the report each week.  I can remember doing this 14 years ago but I have to say if something occurs that I can’t do it on  Friday then there will be no report unless someone volunteers.

So the season starts with the La Marina travelling to the other side of the world to play our good friends El Cid. We started well by getting all the bacon sarnies we needed on time but from there on we went rapidly downhill with all rinks losing bar one which just happened to be my rink.  We were brill and Dave O’Sullivan, Wendy Latham and John Mallet carried me well.  Mind you it was worth going for the meal afterwards.

The Seagulls played the Dolphins on Friday and this time my rink didn’t do so well , losing by two to Barry Sadler, Angie Butler and Maggie Sadler. The other winning rink for the Dolphins was Brian Duff with Martin Butler and Maria Duff. Three more  winning rinks for the Seagulls were Len Daniels, in a close fought game of 16 – 14.  Arthur Cronks’s  rink was another tight game winning 20 – 17 while Terry and Jean Perchard and Captain Gina Hindle had a more comfortable win.   Seagulls got the overall score by one.  I think it was my wood on the last end !!!! Last to finish as usual.

The Sharks entertained the Emerald Isle Cavaliers with the Isle coming away the clear winners by four rinks to two plus the overall score.  Our two rinks were Kath Manning, Jim Reeves and Alex Whyte and in a very close game of 22 – 21Ron Maiden, Phil Pape and Jim Manning nothing like keeping it in the family.

The Winter League season commenced with a home match against San Miguel and this match seesawed with both sides having the advantage at different times. However, it was the home team that kept their nerve and came out winners by 99 shots to 79.Winning rinks were Sheila Chorley,Rod Edgerton,Sue Jordan and Brian Fraser 27-9. Val Dalton, Alex Morrrice, Pat Harman and Jean Cooper 23-14, and Harold Charleton, Pat Moore, Bill Jordan and Brian Gardiner 20-18.  Overall points score La Siesta 8 San Miguel 4.

The Blues first league match was away at Emerald Isle Claymores but despite winning the shots by 109-103 it was the Claymores that won the points 8-6. Two big wins for Joy Gardiner, John Taylor and Jean Cooper 31-15 and Beryl Styring, Ramsey Sinclair and Alex Morrice 30-4 helped but La Siesta just came up short.

The Golds started their home campaign in the Southern League with a 10-4 defeat at home to Greeenlands Cedars with a points score of 95-109.The winning rinks for La Siesta were Wendy Ralph,Tony Campbell and Johnnie Ryder winning 23-16 and Penny Porter Rab Logan and John Lincoln winning 21-15.With lots of new players La Siesta will look to improve as those players get more experience as we go on but well done to everyone for their efforts.

Two more Touring Teams are yet to visit with Fleet on Sunday and Burgess Hill on Tuesday.

Monday 10th October saw Monte Mar entertaining their first touring team of the week, Hemel Hempstead Bowls Club from Hertfordshire. The morning started with a fun Spider competition which was won by our Membership Secretary Les Bounds. Following there was a very competitive match which everyone enjoyed and was won by Monte Mar. Welcome refreshments were enjoyed by all.

Tuesday 11th October we welcomed Penarth Bowls Club from Wales. T o make up the numbers for Penarth, three of our own members played for them and had a very enjoyable game. All Monte Mar members were presented with a very nice slate coaster. Following the bowling an enjoyable couple of hours was spent having lunch and drinks, when Penarth promised they would be back next year.

We played Benitachell our first game in the Winter League. A very strong team, I was happy with our result losing 7 – 5. Also our Berleen did not let us down just losing a very tight game, so well done to you all. R. Cairns(Captain)

Monte Mar Matadors were at home to Mazarron Miners winning on four rinks.

Towards the end of a busy twelve days of bowling, the Toreadors opened their Southern League program with a tough away match at Vistabella. Following an extremely good morning of bowling, with both teams winning on three rinks, the Toreadors unfortunately lost eight points to six as a result of overall shot deficit.

Congratulations to San Miguel players, Chris Collier and Stuart Denholm for winning the 2016  Mens Pairs Valencian Championships.  It was a great game to watch.  The triples, Eileen McLaren, Tom Dalgleish and Mary Dyer had a very close game right up to the last end.  San Miguel were holding shot for game, when the opposition got a rub and it cost San Miguel the cup!!  In the ladies singles, it was a rerun of 2014, Anita Brown (San Miguel) played Jackie Johnson (Quesada).  In 2014, Anita won it for the second time, in 2016 it was Jackie’s turn, well played both.  The rinks also went to the last end with Cliff Plaisted, Val Collier, Chris Collier and Stuart Denholm holding, when Bill Pain came in and cut the shots down for Vistabella to win.

Many thanks to all who helped in any way with the running of the competition.

The Winter League had a rocky start to the new season, only managing 4 points away to La Siesta.  Well done to Noel Davis, Lee Sinclair, Gail and Fred Willshire 21-13:  A close game by Reg Cooper, Val & Chris Collier and Stuart Denholm winning 17-16.  Total shots 79 to San Miguel and 99 to La Siesta.

The draw for the club championships has been made, check the board for details.

WASPS on Wednesday afternoon are proving very popular. Come along at 1.30pm €5 for bowling, shoes, woods and tuition if required.