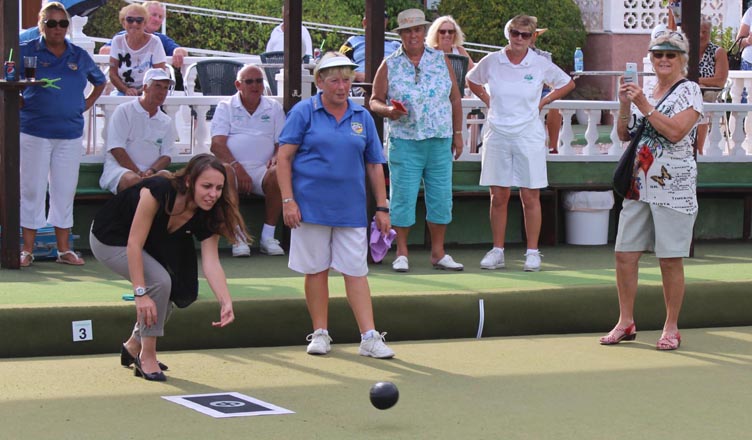 Following their success with the National Bowls Championships held earlier in the year, the country’s leading insurance provider, Linea Directa, were once again delighted to afford their support with financial assistance to the sport as the region’s best players competed for the eighth Valencian Lawn Bowls Championships held at three local bowls clubs over the last two weeks.

The preliminaries and heats took place at the San Miguel, La Siesta and San Luis clubs before the players gathered at San Luis to compete in the latter stages, the semi finals and the finals and rather surprisingly, as the tournament entered the final day there were no current holders in the frame. Neither were there any bowlers from the host club which, playing on their home rink, would usually be expected to provide them with a distinct advantage.

Fortunately there were not too many players featuring in multi disciplines with only Stuart Denholm of San Miguel and National Champion Martin Foulcer of Vistabella playing in more than one final so the morning session of the final day saw the Men’s Pairs, the Mixed Pairs and the Mixed Triples provide the main competition.

The Mixed triples, however,  was 14 all going into the last end as the La Marina skip, Dave Hadaway, put a heavy wood down a with  San Miguel holding shot. There seemed no way that he could draw it but with a bit of a wick got the shot to take the match and the title. Final result: Kathy & Jim Manning, Dave Hadaway (La Marina) beat Eileen Mclaren, Tom Dalgleish, Mary Dyer (San Miguel) 15-14.

The afternoon competition was rather more eagerly awaited with the two blue ribbon events attracting most of the attention.

However, while Peta Rhodes and Carol Broomfield of Quesada made up for their disappointment in the Nationals by comfortably beating Lin Watkins and Carole Thorpe (Vistabella) by 21-4, the Mixed Fours final was a particularly tense affair, going down to the very last bowl of the final end by two evenly matched teams.

With Vistabella enjoying a four shot lead going into the 18th end opponents San Miguel held five as Bill Pain stepped up to deliver the final wood of the match. San Miguel could only watch on in admiration as Bill played a ‘chap and lie’, taking out the opposing shot wood to replace it with his own. Spectators agreed that it was quite probably the shot of the tournament as his team mates threw their arms into the air in delight. Final score 17-12 in which Mo Foulcer, Arthur Brown, Martin Foulcer, Bill Pain (Vistabella) beat Cliff Plaisted, Val Collier, Chris Collier, Stuart Denholm (San Miguel).

The Ladies final was much more evenly contested with both players keeping pace with each other, seemingly picking up shots on alternate ends. That is until the 18th end when inexplicably, Anita Brown dropped 4 to provide Jacqui with a 17-13 advantage, from which he two times champion never recovered.

Jacqui, who was a member of the successful fours winners last year, then picked up shots on the final 3 ends to consolidate her first Valancian singles success.

Presentations and the closing ceremony took place in brilliant sunshine on Saturday afternoon after yet another first class event in which National Director Bob Donnelly thanked sponsors Linea Directa and supporters Seagate Financial Management, together with the club owners, proprietors, umpires and marshals at San Luis, La Siesta and San Miguel Bowls Clubs, for their outstanding support.

He ended his closing dialogue by then picking out the organising committee of Fred Trigwell and June Jones for their sterling efforts in ensuring the continued success of bowls in the community and in particular the 2016 Competition.