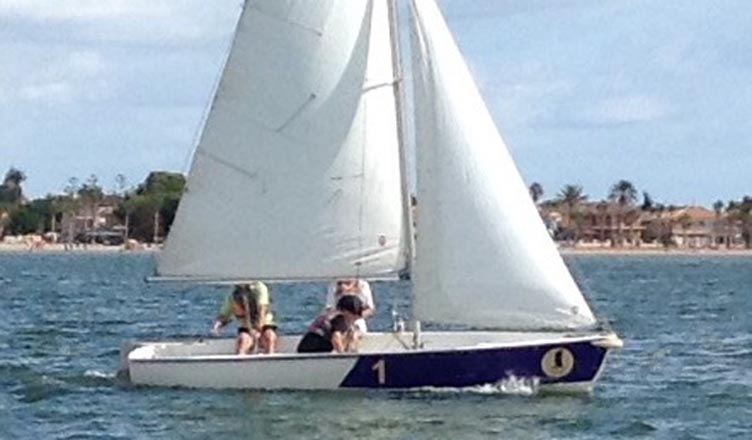 The SAMM (www.sailingmarmenor.com) race day on October 2nd was set to be a good one when 10 boats and their crews registered to compete but from then on it started to deteriorate.

The forecast wind was SW to SE, so the course was set for this but the first race was delayed by 15 minutes as there was no wind and by the time a start was possible the wind had changed direction twice resulting in a reaching start.

The two Sailfish were to start first but, due to delays in getting the crews out to the boats, Sirocco only just made it. For the dinghy start 5 minutes later many of the boats crossed together and there was much shouting for water. Mistral only managed to get to the line after the dinghies and then on her second lap missed the first mark. The delay sailing back effectively put her out of the race so she retired at the end of the third lap.

By the time of the second race the wind was NE 5 to 10 knots so the course was reversed. Sirocco was away first to be followed after 5 minutes by the dinghies.  It was a close start with lots of shouting as one boat was going in the wrong direction as its crew did not attend the briefing and were unaware of the change. Thank goodness no damage was done.

Each lap was closely contested with the Race Officer struggling to record the times as several boats crossed the line together. Four quick laps with just seconds separating the boats corrected times.

During the morning the Race Officer had developed a very bad migraine which unfortunately affected his performance. The results were announced but later checking highlighted time recording errors in the first race which had to be declared void and maths errors in calculation of the second race which affected the announced result and showed that Shoestring Uno was the winning boat.

Never-the-less a good day out and some fine sailing by all crews.

The next race day is October 16th, 10am on the beach at CTD Los Narejos.