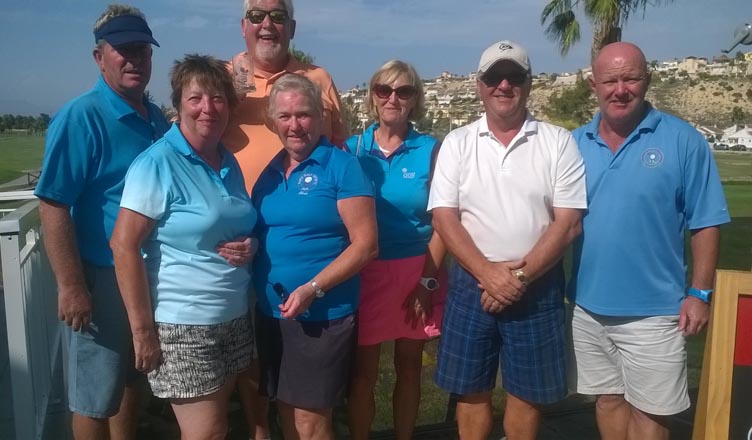 A perfect day weather-wise and with the course in its usual condition, 54 members and 4 guests gathered to play a stableford competition under the leadership of new Captain Theo Boelhouwer. It seems members had no lasting hangover from the previous Saturday’s outgoing Captain’s dinner where Barry Roehrig handed over the reins to the new incumbent. 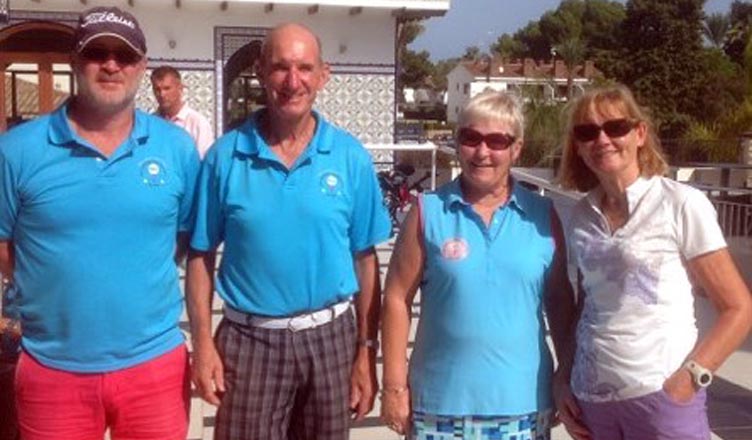 Excellent scoring ensued, with a couple of members of the Society’s Pink Quesada league team, which overcame the trophy holding SMGS Blue team in Monday’s first round of this year’s Quesada League, leading the way, Glenn Rapley and Roger Webb winning their categories. Glenn had the joint best score of the day along with Kyree Skarsmoen, their 40 points being followed by a host of other good scores, 29 members recording 32 points, the lowest category prize winning score, or above.

At prize giving members Richard and Camel McCann kindly donated to SMGS’s charity pot by handing over their favourite piggy bank, the contents of which, 125 euros, will be given to one of the next charities SMGS’s Committee determines to support. We thank them very much for their generous donation to a worthy cause.

The day’s competition results, by category and in reverse order, were the following:

The Abacus was won by Les Wilton.

The Best Guest was Alan McCombie, winning with 33 points.

Our thanks go to the staff at Villamartin golf course for their contribution to the day.

Keep up to date with all SMGS matters by logging on to our website www.smgs.org or simply give Theo a call on 966 723 630 to find out more about the society and its weekly golf get-togethers. Next week we will be at Mar Menor.

An uneven 23 entrants left an unwieldy number for the Annual Captain v Vice Captain competition on 4th October. One lucky member found himself playing on behalf of the Captain for the 1st nine holes and the Vice Captain for the 2nd nine and so qualified for a winners prize whatever the result. Step forward Alan Janes. No matter how well you play in this competition while winning your individual match, you could end up without a prize if you were unlucky to be drawn on the losing side, as was the case with Mel Hope who beat his opponent 10 & 8 – for the Vice Captain’s side.

The Captain John O’Brien beat Rod Loveday who is in charge of Vice in their individual match for the trophy.

If anyone would like to join our Society, we play at El Plantio Golf Club on Tuesday, Friday and Sunday. We use both courses – the Par 3 nine hole course and the main 18 hole course, so we cater for all abilities. The membership rates are very competitive, so call for more details. Anyone who wishes to play in the Society as a guest or join as a new member, contact Ian Henderson on 966 716 616 or 636 116 230.

This new and latest established Society held their inaugural match at Alenda Golf.

Although the course was not in the best of condition the players taking part managed to achieve some excellent scores. With two players getting 36 points,who incidentally were brothers in law,then the overall placings had to be decided on countback and on this occasion Jim Bremmer took the honours from Tony Foster.

After the match all players returned to La Unica tapas bar for a welcome drink and some excellent food prepared and presented by Marina the Hostess of La Unica.

Members in attendance discussed the way ahead and interim secretary Bill Fantom reminded everyone that details were on the society web site and that the next match would be at Alicante. He also suggested that a small group of members should meet at a later date to discuss which courses to visit during 2017

We started the week with a 2 ball better ball which was played in perfect weather conditions. Unfortunately there were a few no shows largely due to excesses the previous evening drowning their sorrows after the Ryder Cup defeat. Nevertheless the pairing of Brian Dent and Peter Wickham came home with an excellent score of 46 pts to win by 5 points from Geoff Biggerstaff and Bryan Neal with 41 pts.

It was the second medal round of three to find our Club Champion on Wednesday. Lindsay Forbes had the best round with a net 71 thanks to a few fortunate assists from the numerous trees surrounding the course which for most tend to be a hindrance rather than a help. As usual there were 2 Categories on the day and the top three in each were as follows:

There was a shock result in the preliminary round of our Pairs Knockout Match Play championship with last years winners Lindsay Forbes and Maria Oldenziel being eliminated by Reg Akehurst and Heinz Lei 3 & 2. The only other match saw Ron Phipps and Hendrick Oldenziel beat Yvonne Phipps and Rod Doel with the match going to an extra hole. The majority of our members played a Mulligan with Doug Wright taking first place with 36 pts. Mike Chapman was second with 35 pts and Ken Robertson third with 34 pts beating Peter Radcliffe on a count back.

Match 1 of the 2016/17 season.  What would it hold with a new team and rising green fees.  It was certainly an early start arriving at the course in the dark for an 8.20am 1st and 10th tee.  We managed to get off to a good start with all the Captains paying for their complete teams in one go, at last!  As the dawn broke the course looked in excellent condition and no wind.  All the teams got away from the 1st and 10th on time and the scores began to ebb and flow in the normal match play way.

The sun came out and left us with the perfect golfing day.  As the teams finished and the cards were scrutinised our new team had bagged first place.  Well done Plaza Golf Society.  So with the presentation of the nearest the pins completed, prizes for which were donated by San Miguel Golf Society, the teams headed home.  Our thanks to all the staff at Font del Llop Golf for giving us a good day.  The date of the next match is the 7th November at Altorreal 10.00am tee.  Results of nearest the pins and League Table below.