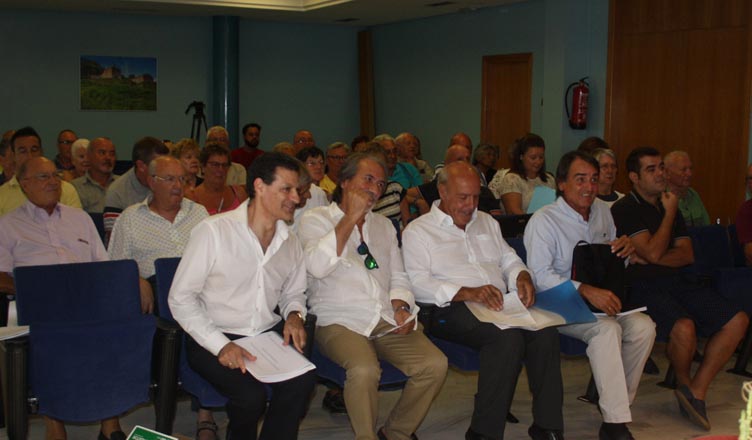 Representatives of the Coastal Collective, the Federation of the Orihuela Costa (FAOC), met with the Orihuela mayor, Emilio Bascuñana, and the councillor of Tourism, Sofia Alvarez, on Wednesday, when they presented the city officials with a comprehensive document of complaints and proposals, compiled by Coastal Residents, for inclusion in the 2017 Municipal Budget.

In justifying the demands of Coastal residents the FAOC President, Joaquin Capel ,stated that “We Oriolanos want nothing more than an equitable share of the budget, monies to which we are entitled and investment in which the coastal area is so desperately in need.”

Spokesman Thomas Moreno said that many of the proposals are repeat requests that have been submitted to the council on lots of previous occasions. In outlining the services required he said that much of the coastal infrastructure is ageing and in poor condition. Many of the public services provided by the council are totally inadequate and from a list of over 90 proposals at least 35 of them are considered to be in need of urgent action and financial investment.

He said that the document has been prepared and developed over many months and that it has involved over fifty people from many different associations. “They have spent many hours analysing the shortcomings of the council provided coastal services,” he said, “giving rise to more than ninety proposals which the mayor now needs to give some serious thought.”

The mayor told the gathering that “there is a unanimous desire amongst the government team that the views and interests of the citizens of the coast are seriously considered when deciding and prioritising council spending and investments although these things are not as simple as they seem.”

Aspects that can be dealt with fairly quickly and easily include a coastal cleanup plan, improvements to waste collection and the increased cleaning of roads and public spaces including gardens and parks. There should also be the introduction of an eco – park for the deposit of garden waste and prunings.

The report also asks for increased services on the beaches, including better solutions to the collection and disposal of algae. He said that such measures should be introduced all year, not just in the high season.

Other complaints include the poor state of paving and signage, greater attention to accessibility, certainly for the elderly and the infirm, increased safety, for example the road between Villamartin and La Zenia which in dire need of improvement.

Oscar Garrido, from the Villamartin Neighborhood Association, highlighted the problems faced as a result of the excessive influx of cars resulting from the opening of the boulevard. He said that his members are in desperate need of traffic calming measures in order to slow the traffic down.

The subject of the La Zenia Emergency Centre was raised once again as was the lack of cultural facilities and events being provided on the coast.

Adolfo Hernandez, secretary of the FAOC, highlighted the problems in Dehesa de Campoamor  where the pavements are virtually nonexistent, representing a clear danger to pedestrians and vehicles.

Following the meeting Moreno said that “we have done the work on the coast and the mayor is now well aware of our requests. We now trust him to take them away and give them some thought but only time will tell as to whether our voices have been heard.