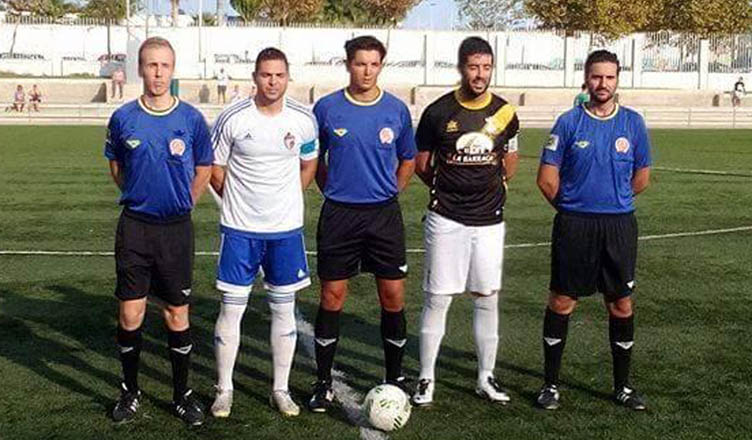 But the conflict doesn’t stop there with statements issued to the golsmedia website by Torry players indicating during the week that there was still a massive divide between the board and the players which seemed likely to continue until a new man could be brought in to steady the ship.

And we were all thinking seven days on that we were in for an interesting evening with the likelihood that senior players would be responsible for coaching and team selection, so to be hit with the presence of the popular Pedreño and, for many years, his right hand lieutenant, Carrasco, just about everyone was thrown, apart perhaps from the Torry inner circle.

Quite when the appointments were made is just about anyone’s guess as the Board of Directors seem totally oblivious of the need to update the supporters and the press. I think it is fair to say that we were all caught completely unawares.

And with the starting lineup also featuring quite a number of players who seem to have arrived on the back of the same news blackout during the week even the regular supporters were confused as the home team took to the field.

With Correa’s financial settlement still pending neither of the new management team were able to take their place on the bench but the influence of Pedreño was clearly there to be seen right from the opening play.

The players were altogether more committed, during long periods of Torry possession the ball was being moved across the park and everyone wanted to be involved.

So it was a brighter than expected start from the home team with a golden opportunity in the opening seconds by Navas from an accurate Llorens cross. From just four yards out the winger headed over an empty goal.

Lewis was next to provide, following a decent run down the left flank. The unmarked Matheus was only inches wide with his shot, but to everyone’s delight, just four minutes later, the same combination made amends as an effort from Matheus crept inside the right hand post.

With the Torry defence working well to snuff out any Novelda threat the visitors were kept to shots from distance. It allowed new Guinea keeper Buba to have a relatively quiet introduction to his new club with only one real intervention necessary, toward the end of the first half.

Unfortunately the situation changed rather quickly as the second period got underway with the keeper needing to pull off two excellent saves in the opening minutes as Novelda took the game to their hosts. Their intensity continued and now it was the turn of the visitors to dictate the pace of the game.

Torry were still pushing forward when they could but their opportunities were limited as Segarra and Neme dominated midfield.

The visitors were getting closer so it came as no surprise when Jordi pulled them level with a neat flick with less than ten minutes to go. And as the pressure continued the home side were doing all they could to keep them at bay.

Indeed they were denied a nailed on penalty as Lewis was bundled over in the box late on. The referee took the easy option by blowing for full time.

So after promising so much in the first period, a win it was not, but a very good performance it was and with with Pedreño and Carrasco now able to have a week with the team it’s a better than expected start.

Might we now be hoping for more with next week trip north where Torry meet 3rd placed Ontinyent next Sunday kicking off at 6pm..

The Smartest Players in the English Premier League: A Statistical Analysis of 2021.