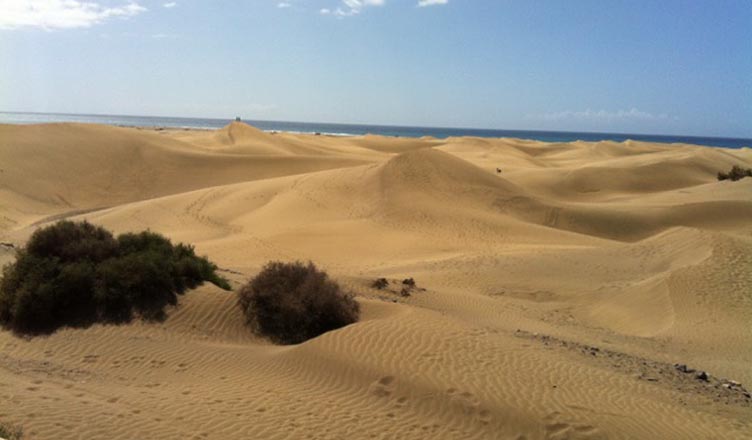 Most of us take sand for granted. Many of us hope that when we go on holiday, we will be able to enjoy a clean beach, with lots of golden sand. If we have deeper pockets, maybe we can head to one of those picture postcard Caribbean resorts offering white sand, or possibly somewhere even closer to home.

So what is sand? It is a natural material that has been created from finely ground rock particles. It varies according to its location and its source of rock in the area. Another type of sand has been created over billions of years from various life forms, such as shellfish and coral, as well as from eroded limestone; this is the type of sand that is mostly found in exotic places, such as the Caribbean.

The sand on most of the Canary Islands is black, simply because the islands are volcanic in origin. Maybe it is not so nice to look at, but it fulfils broadly the same purpose when building sandcastles.

To the south of Gran Canaria are the Maspalomas Sand Dunes, which are spectacular two square kilometres of sand that originate from coral reefs; the area was declared a Natural Reserve in 1987. Over thousands of years, these have been crushed into fine golden grains of limestone through the grinding action of glaciers. Ocean currents drag the sand to the shore where the wind gathers it into huge and spectacular dunes.

The sand is blown inland from the beach, where it accumulates around shrubs. The piles of sand eventually grow larger than the shrubs and gradually move across the field of dunes to create the incredible landscape that we currently enjoy. This is as an ongoing cycle and the reason why the landscape changes, albeit quite slowly, over time and from east to west.

Over the years, the area has become a tourist hotspot, and well known for the beauty of its dunes, as well as for the facilities provided by some of the best hotels in Spain. Sadly, the rapid building development in the area has changed the ongoing cycle of sand. The dunes are now hemmed in by large buildings; instead of the sand moving in a continuous every changing circle, the sand is now blown out to sea. As a result, the quantity of sand is reducing and the dunes are getting smaller.  Indeed, it is suggested that within the next century, the dunes could disappear altogether.

Since the dunes are an important tourist attraction and create valuable business for the Canarian economy, plans are currently being discussed by the Island Government to replenish the sand on the dunes by taking it from offshore sandbanks, and before the sand is blown out to the deep water. This will be an expensive and time-consuming process, if it works. The only alternative is removing all the hotels and large buildings in the area, which I guess wouldn’t go down too well with hoteliers and tourists alike.

We have yet another example where Island planning has failed to take into account the forces of nature and the need to work with, rather than against, the environment; natural forces always have their way in the end.

Maybe a few, smaller hotels built to sensible, low level specifications, as on the Island of Lanzarote, would not have had the grotesque impact that the thousand bed monstrosities have had upon the local environment. Yes, the tourist capacity and income would be much reduced, but at least we would maintain the magnificence of the Maspalomas Sand Dunes.