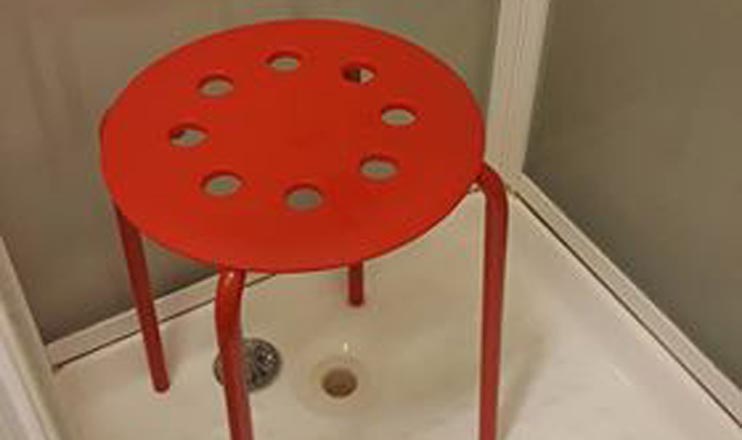 The multinational furniture outlet Ikea has said they are looking at changing the design of a bathroom stool because of a complaint from a 45 year old Norwegian which has recently gone viral on Facebook.

Claus Jørstad had the misfortune to get trapped on the stool by his testicles while taking a shower.

The incident occurred when Claus, who suffers from a knee problem, decided to sit in the shower on the eight hole stool, which he had recently purchased from Ikea.

He says that he didn’t realise what had happened until it came time to stand up at which point he suffered a strong pull from the stool. Fortunately the Norwegian didn’t panic. He remained in situ before showering once again in cold water to enable the swelling to reduce.

His problems were laid bare in a hilarious Facebook post, with pictures, in which he described his genitals as the ‘skipper and two sailors’. (It would seem that Scandinavians object to direct descriptions of genitals.)

In his hilarious post complete with pictures and updates, Mr Jørstad described his genitals as the ‘skipper and two sailors’ because he said Swedes did not like direct descriptions of genitals.

The Swedish retailing giant were quick to respond in a similar jocular tone saying “Hey Claus. We recommend that you take the stool out of the shower in future … or that you sit on it with the right clothing on and in the right setting. ‘If you choose to keep it in the shower, make sure you are well dressed for your next sea excursion.”