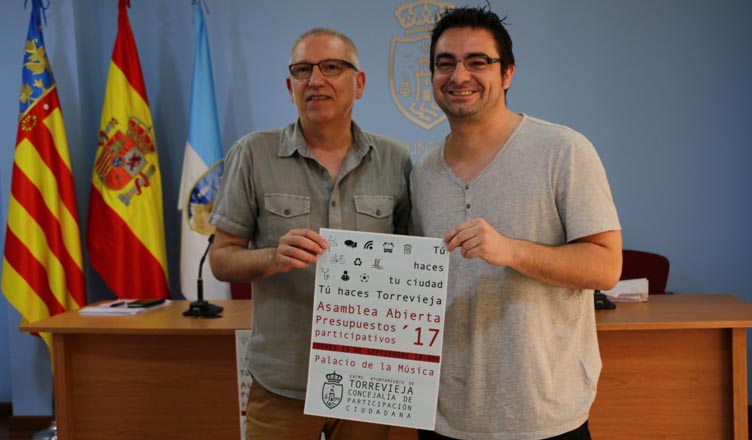 Held under the slogan “Your city, your Torrevieja” The Councillor for Citizen Participation, Victor Ferrández and the Councillor for Finance, José Hurtado, have released their draft budget for 2017 based on almost 500 submissions gathered from members of the public.

Among the proposals they have raised is the creation of a Municipal Housing Association, a Youth Leisure Centre and a municipal nursery school. They also want to create a network of bicycle lanes throughout the town, a municipal bike rental facility and a municipal park in La Siesta-El Chaparral.

The councillors said that their proposals had been drafted following extensive meetings with the public, many of which were being submitted as a direct result. The overall feeling was that residents increasingly require better organised economic and social development in the town.

Ferrández said that “the collection of urban solid waste, street cleaning and beaches, which saw an investment of 5.5 million euros in 2016 will be increased in the coming year with additional funding made available for improvements to pavements and to roads, street lighting and maintenance of parks and gardens “. These increases were as a direct result o requests from 180 citizens.

He said that, in total, citizens have raised 480 proposals through 160 written submissions from associations, groups and private individuals among which are “protective measures for victims of male violence with the creation of an Emergency Fund for victims; more places in public nursing homes as well as a number of other age-related social welfare and employment policies “.

Together with those measures that require large investments, members of the public have also raised the need to act in areas of municipal jurisdiction where many of their specific needs relate to the poor state of local parks and gardens, urban furniture and speed calming measures in residential areas.

José Hurtado said that the councillors must take heed of these proposals because they come from the people who live in the Torrevieja and pay their municipal taxes. He added that this draft budget “is not a castle in the air” and proposals “it will not fall on deaf ears” because many of the proposals have the will of the people.

Ferrández said that most of the requests received in the participatory budgeting process for 2017 call for improved basic services such as in rubbish collection, investment in parks, pavements and lighting and this is where the draft budget must be concentrated.  But the six other major proposals must also be considered although there quite likely won’t be funding for them all so it will be necessary to put them into some sort of priority.

He invited suggestions to the order in which they should be places; the municipal nursery school for children aged up to 3, a network of bicycle lanes and an associated management system bicycle rental;  a centre for local associations, a municipal youth centre, the creation of a municipal social housing stock and the municipal park in La Siesta-El Chaparral.