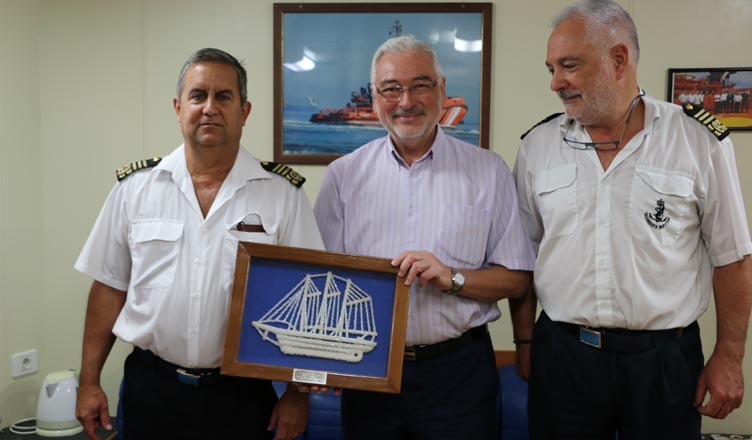 The mayor of Torrevieja, Jose Manuel Dolon, has presented a salt boat to the captain of the SAR Mizzen, Jorge Garcia, on behalf of the city, as a thank you for the service rendered by him and his vessel along the town’s coastline during the summer months. He described the presence of the rescue vessel in the port as “historic”.

During the ceremony, which was carried out on board the ship, the mayor expressed his gratitude to the captain and his crew “for the services they have provided to the town and its people throughout the summer.” He said how delighted he was that, for the first time in its history, Torrevieja been entrusted with a resource as important as this, thanks to the confidence of the maritime authorities and the various efforts that have been made by the municipal government” .  He especially thanked the Maritime Captain of Alicante, Cayetano Perez and the Director General of the Merchant Navy, Rafael Rodriguez Valero.

Dolon described as “an exceptional opportunity” the ability to have a safety and rescue boat so readily available that has allowed Torrevieja to enhance its position as a “safe shipping point”, which the mayor said is essential when managing such important resources in the area as fishing, sport fishing, shipping and water sports and other a multitude of leisure and recreational craft in local waters.

He also announced his intention to request a similar presence in subsequent years “in order to have a rescue ship permanently available on our coast.” The SAR Mizzen has been docked at the Salt  Pier for almost two months and is expected to leave in the coming days to continue it’s work elsewhere with its task of maritime rescue and emergencies.