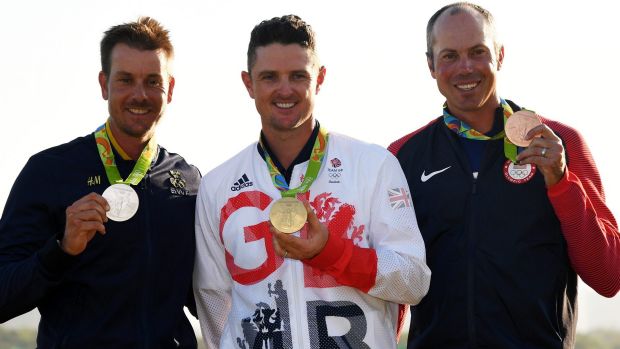 WELL DONE JUSTIN, a golfing gold!  No medals for the outfits though, poor old Team GB  looked as though they were gong to paint and decorate the stadium!

BUBBA WATSON was thrilled by his Olympics experience.  “We got tickets to see the fencing, we didn’t know what it was but we went anyway, it was  terrific!” he told interviewers, before heading off to try and buy a drink at the parallel bars.

“NOT AGAIN!” presenters groaned, as the PGA Tour Championship course was flooded and thunder and lightning caused a mass exit.    Play was suspended at Baltusrol on the Saturday, forcing many, including winner Jimmy Walker, to play a marathon 36 holes on the Sunday.

Weatherwise it’s been a bad year for American pro golf, for spectators as well as players.  Unfortunately, there’s nowhere to hide on the course if a storm blows up.  In the US Open at Hazeltine on June 13th 1991 the horns sounded for players to leave the course, but for 40,000 spectators there was nowhere to go.  Six of them were struck by lightning as they sheltered under a tree, and  27 yr. old  William Fadell died later in hospital.  Lee Trevino, who was playing that day, had a poor round after play was resumed, but commented: “How can you get frustrated by shooting 77 when someone died?”

It was Trevino’s second narrow escape on a golf course.   In the 1975 Western Open at Butler National, lightning hit a lake and travelled through damp ground hitting both him and his partner Jerry Heard.  The bolt surged through Trevino’s bag, went up his arm and out through his back.  Other players were knocked to the ground, and Tony Jacklin’s club was torn out of his hand and landed 30ft away.

Retief Goosen was aged 15 when lightning struck him on a golf course.  His clothes were burnt off and his watch melted to his wrist, and he was left with an irregular heart beat and partial deafness.  He keeps the scorched clothing as a reminder of his close shave.

WHO WILL RORY McILROY sign up with after Nike?   What about golf’s newcomer, PXG?  Parsons Extreme Golf spent last year snapping up tour pros including 2015 Open Champion Zach Johnson, Billy Horschel, Ryan Moore and Charl Schwartzel.  The brain behind PXG is golf-mad billionaire  Bob Parsons, the founder of  “GoDaddy” (don’t ask)   Parsons lured a pair of Ping engineers on board to design ‘the best golf equipment possible, money no object.’   “We will only bring a new set out if we think we can improve on these.” Parsons says, which makes a nice change from Taylor Made’s two every year.

A set of PXG clubs could be just what Rory needs. “I wouldn’t give the prototypes back, I loved them so much,” Ryan Moore enthused.  James Hahn says: “They aren’t just innovative, they’re unbelievable.” At £4,000 for a full set, I’ll have to take their word for it.

JIM FURYK enjoyed being the first player in PGA Tour history to shoot a round of 58, with 10 birdies and an eagle at the Travelers Championship.   Miguel Angel Carballo was so excited he marked Furyk down for a birdie on the 14th instead of par.  His mistake was found just in time to prevent Furyk becoming the first player in PGA Tour history to murder his playing partner.   Furyk still only managed 5th place behind Scotland’s Russell Knox, who had a 2-under final round of 68.

ERNIE ELS  lit up the third round of the Travelers with a hole in one at the 176 yd 16th. 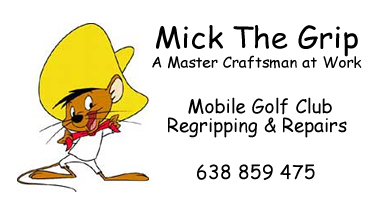 Giving high-fives to playing-partners Keegan Bradley and Louis Oosthuizen, the Big Easy told the caddies: “I’ll keep the bar tab open for six hours, after that you’re on your own.”   After that, they were probably under the table.

Until next time, Happy Golfing.