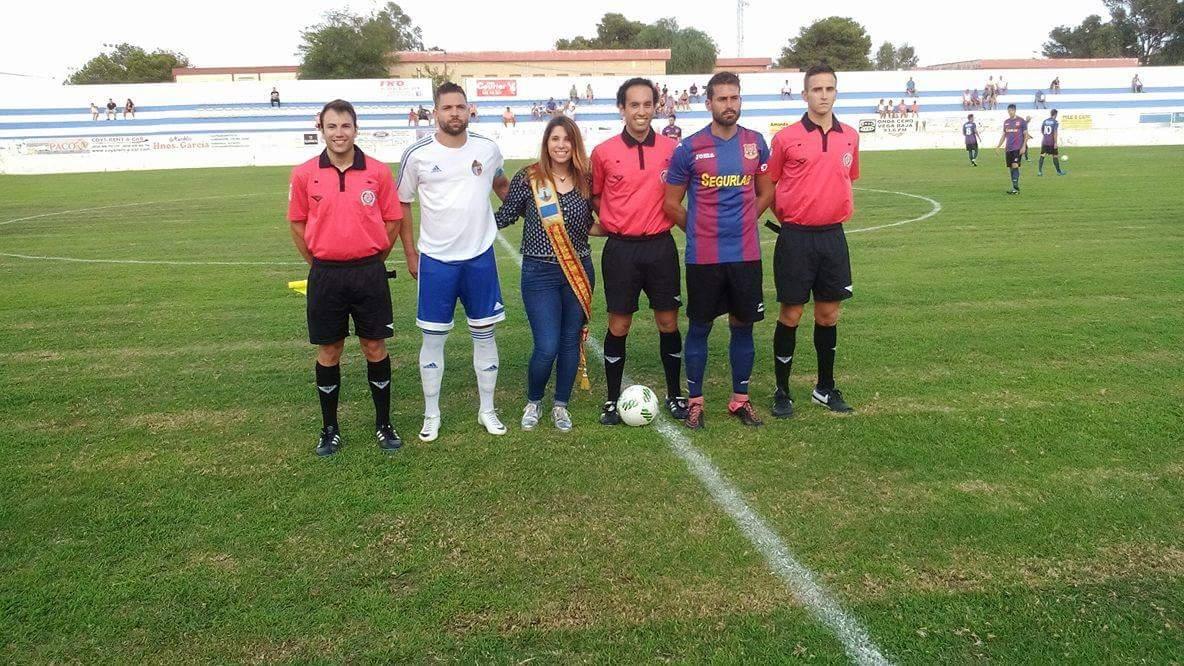 More than 3 months have elapsed since CD Torrevieja last played a competitive match in division 3 group 6, and they couldn´t have wished for a more appealing opening fixture.

New Torry manager Gabi Correa led his troops out to do battle with local rivals Almoradi, who make a welcome return, following 19 years exile from this level of football.

With the small matter of pre season friendlies (won 2, lost 3) out of the way, senor Correa has assembled a reasonable looking squad, swelled by the midweek signings of Costa and Matheus, increasing the number to 16.

Almoradi meanwhile, remained unbeaten in their pre season run outs.  With Fran Rodriguez at the helm, they can boast no less than 5 ex Torry players within their ranks.  Obele, Cristian Sanchez, Manu & Sergi have all worn the blue and white strip so loved by many, but it´s last year’s captain Burguillos who raised a few eyebrows, for he is reported to have wanted lower league football as the training schedule got in the way of studying – more money changing his mind perhaps?

However, now with both clubs into the business end of things, the only question on most supporters minds was ‘Which of the two clubs will get their season off to a winning start’?

All the early signs pointed to the Torrevejense who were far quicker out of the blocks than Almoradi. They were certainly playing all the decent football but most of it, unfortunately, was in the midfield third with them presenting little of a threat to Josete in the visitors goal.

Torry did go close, however, in minute 10 when a Zapata free kick shaved the top of the woodwork.

It was on the half hour when the home side created their next chance of note, a Lewis cross met by the head of Matheus that we all thought was creeping in before a wicked deflection diverted the ball for a Torry corner, and then just a couple of minutes later the opportunity of the half, as Torry skipper Zapata, with only Josete to beat, hit his effort straight into the keepers arms when a foot either side would have put the home side in front.

Nevertheless, certainly in terms of possession, as the teams went into their half time break, Torry were ahead on points, which they would be hoping to capitalise on during the second period.

Last season the home side averaged a little more than a goal a game and as we got deeper into this opening league fixture it very much looked as though even that statistic was not going to be achieved.

Torry continued to apply the pressure but a concerning lack of firepower was giving Joeste a relatively easy afternoon, that was until a final quarter surge which saw the Almoradi keeper pull off an excellent save from Matheus on 72 minutes.

But the heads were now up and as the Torry pressure increased the Almoradi defence finally buckled.

First it was another low shot from Matheus two minutes later and then, while we were still recovering from the winger’s fine effort, Lewis was on target to put the home side two in front.

However, while the home side were still celebrating what they thought was a winning lead, ex Torry striker Obele reminded them that there was still a game to be played when he pulled one back from a fine header with just 6 minutes of the game remaining.

But once again the pressure shifted as captain Zapata was on the end of a stunning strike to send the home fans away with a comfortable win and then who would believe it, yet another late headed goal for the visitors from Poveda.  Now 3-2 and a nailbiting  few seconds for the home side, but they did manage to hang on to secure a deserved win.

Next Sunday the long journey to Villarreal where they take on one of the division’s most consistent sides. The match kicks off at 12 noon.