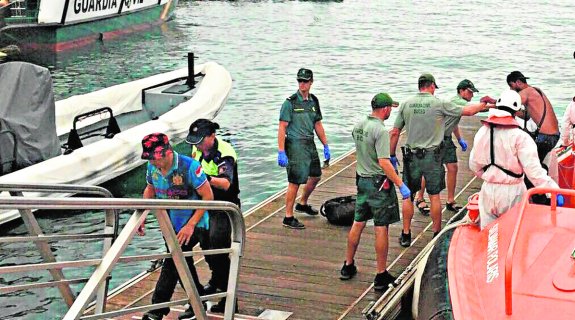 The third boat in a little under two weeks was intercepted by the Guardia Civil on Tuesday with eight Maghrebi immigrants on board. The boat, a new patera of about four metres in length, was stopped half a mile from Cabo de las Huertas off Alicante.

Two of the occupants were moved to a local hospital for treatment of hypothermia and concussion, having first told immigration officials that they had been three days at sea.

However, specialists from the Civil Guard suggested that the involvement of a mother ship which releases these small patera vessels a few miles from the provincial coast, particularly in view of the fact that the boat intercepted on Tuesday was not even equipped with an engine.

This is the third such vessel that has been intercepted recently after similar vessels, also containing illegal immigrants, were stopped off the island of Taberca and the coastline of Torrevieja.

On this occasion the boat was found to contain eight males between the ages of 17 and 41 although the youth will be subjected to medical tests, since it is common for young people to lie about their age, hoping to obtain more favourable legal treatment.

The boat was first spotted at around 8 am by a sailing boat, which provided the first aid and informed the emergency services. One of the immigrants was in the water when it was first sited. He and his companions were taken to the offices of the Civil Guard in the port of Alicante, where they received assistance from Red Cross.

Also on Tuesday the Guardia spotted an inflatable boat about 4 meters long with 6 men board, apparently of Moroccan origin, in Almeria waters, about 23 nautical miles south of the island of Alboran. Later, in the same vicinity a second inflatable boat, 7 meters long, was intercepted carrying 44 people of sub – Saharan origin, 10 of which were women.