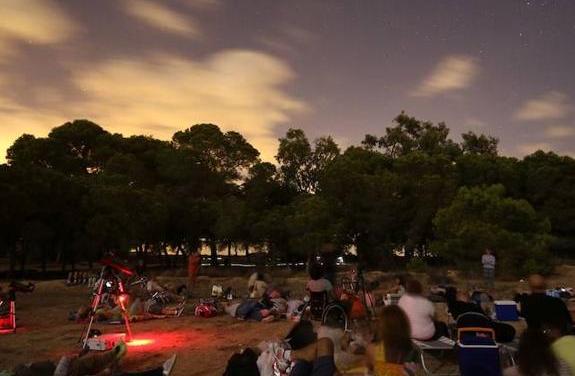 More than 200 people gathered in the La Mata Park last Thursday night to watch the famous Perseid meteor shower which made its appearance overnight into the early hours of Friday morning.

The glorious Perseidsm which peak every year between approximately Aug. 8 and Aug. 14, is also referred to as St. Lawrence’s “fiery tears.”

The activity in the centre began earlier in the evening with a short talk about the park and an indication of what the observers might see. Then, after a walk around the area, participants had a picnic under the moonlight in the heart of the park.

At about eleven o’clock the group began observing the shooting stars while members of a local astronomy society offered explanations of the sky, the constellations and the phenomenon that they could expect to see with the meteor shower.

Although there was some cloud a spokesman said that there was not enough to spoil the night and everyone was very pleased with the numbers that attended and what had been achieved. He said that the public response was so encouraging that the Project Mastral association are already planning additional activities in the coming months.

The earliest record of Perseid meteor activity goes back more than two centuries before the martyrdom of St. Lawrence: Chinese records from A.D. 36 state that “more than 100 meteors flew thither in the morning.”  Today, we know that those fiery darts of light are actually the result of Earth’s annual interaction with the dross left behind by a cosmic litterbug — a comet.