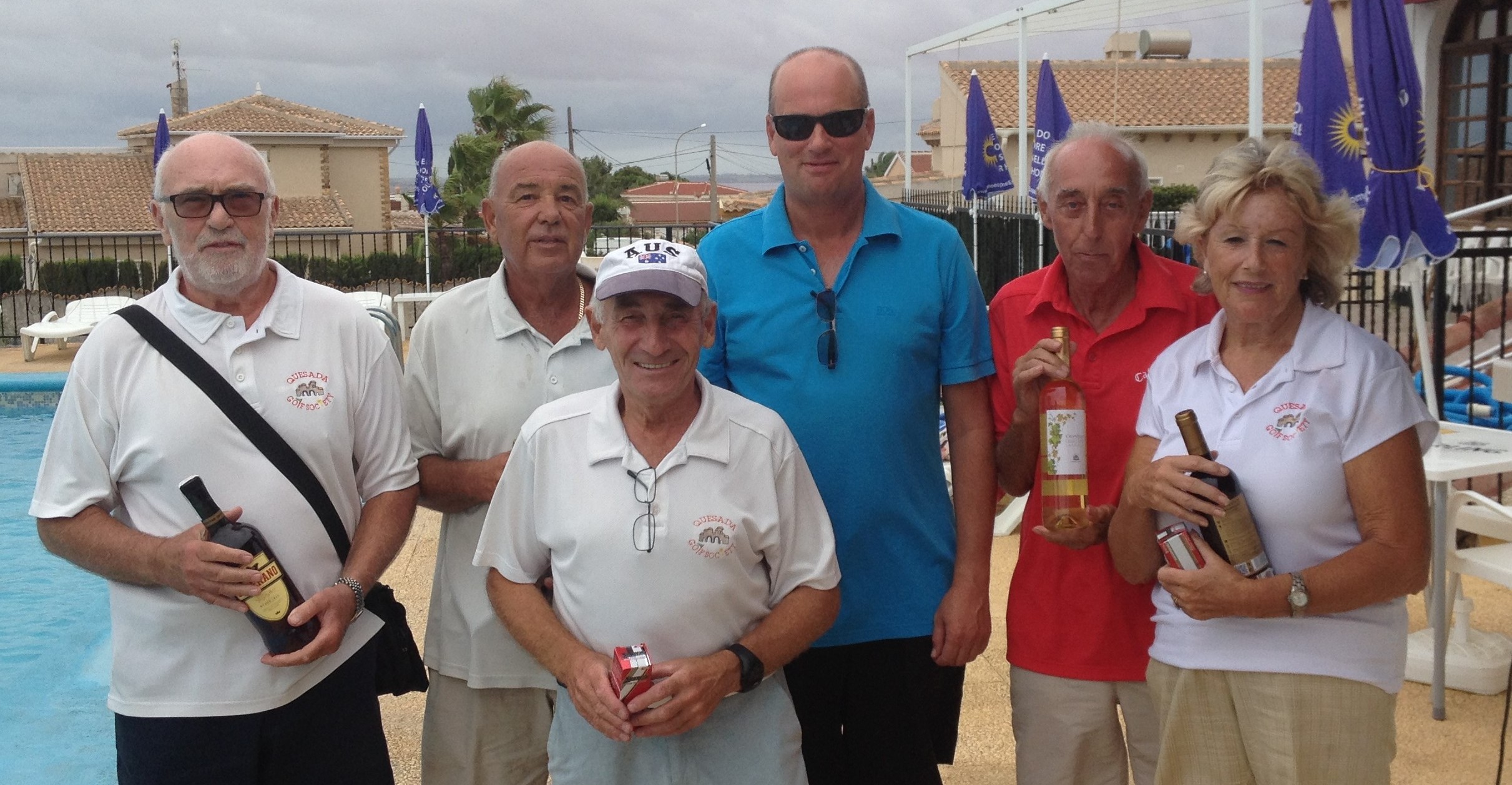 Last Wednesday the society played the course on its doorstep, La Marquesa. The condition of the course was generally dis-appointing with diggers and workmen everywhere and quite a few green-side bunkers not in use. Hopefully when all the work has finished, which will take some time, the course will be much improved. Despite this most players had an enjoyable day. It was a bit overcast which was welcomed by all.

The other problem was the buggies or those unfortunate to have the put-put petrol driven ones. Poor Roy Kavanagh had the one which is used to collect the balls on the driving range and he had to keep pumping the accelerator numerous times before it kicked in and on some occasions had to have a push from the other buggy in the group to get it going. At the end of the round his buggy was pushed back to the clubhouse.

Anyway back to the golf. After a few drop outs the numbers were down and we had 21 players contesting an individual stableford competition. The winner for the 4th time running was big hitter Brent Hollings with 34 points who if he continues his winning streak will soon be playing off scratch. Well done Brent. In second place with 33 points was Lord Ian Fogerty of Manchester. In third place with 30 points was Janet Candelin. Dish washing duties until the next game for partner Big John. In fourth place with 29 points was wee Scotsman Gordon McGregor.

There were a few players on 28 points who just missed out on a  prize. The “nearest the pin” winners were “moaning Bert Morl who wished he had been on the dance-floor strutting his stuff, Darrylldinho Wright of walking football fame when he is not injured, Smokin Tony Patterson and Irishman Simon Fullerton who came in with the best guest score of 30 points. Simon had a good day as he also won the scratchcard with Stirling. There were 3 2´s on the day, Bert Morl, Paul Flanaghan and Brent Hollings. In the annual singles knock-out competition Ian Fogerty beat Paul Flanaghan  and Darryll Wright beat Roy Kavanagh. Both advance to the semi-finals.

After the game the players returned to the society base at the bright and airy bar area  at the Quesada Country Club for the presentations, a drink or two and a tasty hot and cold buffet kindly laid on by mine hosts.

The next society game is on Wednesday 24  August at Font De Llop. The format of the competition will be a Texas Scramble.

Anyone in the Quesada area looking to join a very friendly golf society and play golf once a fortnight at a wide variety of courses at a very reasonable cost, should contact the Chairman & Membership Secretary Les Pancott on 966716723.