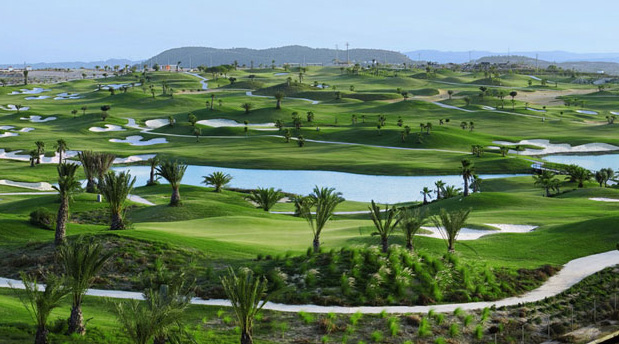 This week San Miguel Golf Society visited Roda with 18 members and 6 guests taking part in a Yellow ball stableford team event as well as the usual weekly stableford.
All 5,820 metres of Roda golf course are wide open to the elements with not much in the way of contours or vegetation to offer any shelter or shade. It’s a course where taking a chance and going for the odd outrageous shot is part of the attraction, I’m sure when the renowned designer, Dave Thomas, saw his plans coming to fruition he must have thought, “If anyone can score well on the first four holes, it’ll be plain sailing for the rest of the round!!

The course was in excellent condition with only 2 players breaking par Tony Smale with 37 and Brian Mulligan with a handicap cutting of 40 points.

In The individual stableford winners were 5th Steve Higgins (33), 4th John Osborne (35), Norman Mcbride (35), 2nd Tony Smale (37) and with the best score of the day Brian Mulligan with 40 points.

And the Abacus going to a very popular winner Alan Macdonald.

In the team event in second place were with 166 points were Steve Fleet, Tony Smale, Norman Mcbride and Nick Spicer.

And not surprising with 2 players in the top 4 of the individual the winning team was John Osborne, Brian Staines, Brian Mulligan and Jamie Rollinson with 168 points.
Well done to all concerned.
Keep in touch with all society matters by visiting www.smgs.org or simply give Barry a ring on 966 731 033 to find out details of all forthcoming Wednesday meetings at which visitors are always welcome. Next week we will be at La Serena.

As if golf isn’t difficult enough on Monday our competition was a Stableford singles in which we were only allowed to use 5 clubs and a putter.  This proved too much for a lot of us but it did not affect our first and second players. Nick Campbell won with 35 pts. and Mike Mahony was runner up with 33 pts

There was some excellent scoring in our Singles Stableford on Wednesday with 4 players attracting the attention of the Handicap Secretary by beating the par of 36 pts. The players in the frame were:

Again, as all week, numbers were well down on Friday with only 12 playing. It was not surprising that the Two Ball Better Ball was won by the old and young “Bandidos” Reg Akehurst & Rod Doel with a very good score of 44 pts.

There will be no reports for the next couple of weeks as the Press Officer and his deputies are all on holiday.  We will be back in early September.

Our August outing took us to Murcia’s Alto Real golf course , once again what a pleasure to play there , as usual we were greeted by Antonio and his staff , their smiling faces and one look at the course told us that we were going to have a pleasant days golf , the course was in immaculate condition , however as is the norm there , it was never going to be a pushover , we had a smaller turnout this month due to holidays , and the August sun to name a couple of reasons , getting to the course proved a little more difficult if like me you weren’t watching where you were going , due to road works at the Molino turn off I missed my turn , this added another ten minutes to my journey , if Chris Waddington hadn’t been with it may have been another thirty minutes as my sense of direction is shocking , but we got there in the end and had plenty of time for a coffee and a practice put .

Onto the results Joe Sheehan took first place with thirty one points , with Martin Collins coming second scoring twenty eight points , as we had a smaller field this month we just paid out cash prizes for the first two places , our nearest the pins were , hole five Ailish Sheehan , the eighth wasn’t reached in one , Duncan Williamson won the tenth and the seventeenth was hit in one by Joe Sheehan , the three players received a sleeve of Srixon golf balls , Joe and Duncan both holed their putts for a two and shared the two’s pot which had been carried over from our July game , to finish the prizes Ailish Sheehan also won the soccer card , I later found out it had been Ailish’s birthday so belated birthday greetings to her .

As is customary we returned to the Mini Golf bar which is a couple of minutes from the Quesada Arches , Lisa , Rik and the staff looked after us again with a mixture of sandwiches and baskets of chips , they really went down well along with a couple of Riks well looked after beers .

Next month we will be travelling to Bonalba’s golf resort and Spa , to play the second of oyur yearly trophies , this time it will be for the Lee Barber Memorial Shield which has been donated by Brian and Nikki Ead and Brian Jones , I hope the course is in as good a condition as the last time we played there as Bonalba is another one of

our favourite courses , I have no doubt that it will be .

Busters Golf Society is a small friendly group of like minded people who play on the first Friday of the month , depending on the time of the year we generally have between sixteen and twenty four players , over the four years since we first formed the society some of our original members have moved on , either returned to their country of origin or have ventured to pastures new , so we are looking for a few more members to swell our ranks , if you are interested in joining our society ( its free) then please email me Barry Grinsell at bustersgolfsociety@hotmail.com quoting your phone number and current handicap and I will get back to you within a couple of days.