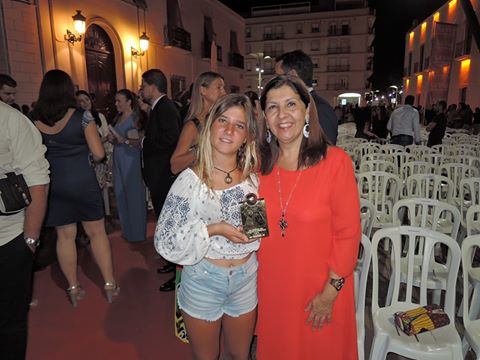 On Thursday 28th of July, our most international Mojaquera, Osaïa Reding, received a well-deserved award given annually by La Voz de Almería, Cadena Ser and Los Cuarenta to outstanding people or prominent entities of the region of Almeria.

In this, the seventh edition of Levante Almeriense Awards, the 2016 prize for sporting excellence was bestowed on Mojácar’s very own Osaïa. An award she received from the hands of the Mayor of Mojácar, Rosmari Cano.

Bashful, happy and, always with that adorable smile, Osaïa was a breath of fresh air at this Gala. The event was lit up by the award winners’ high standards of achievement, with great credit to going a superb organization which has successfully honoured such a large number of Almerian personalities, especially from the Levante region.

During her speech, perhaps her first in public, she gave thanks for the support she receives from Mojácar Council, as well as to the sports companies that also sponsor her and the Voz de Almería for giving this award. As an unaffected twelve year old, she explained those present how to practice the sport of kiteboarding, which she started at the age of seven, training on the beaches of Mojácar. With modesty and, the hard work ethic of all the great athletes, she has become champion of Spain and second in the World in the under 15 category. She attended the event accompanied by her mother and coach, not forgetting her trusty kiteboard, which has travelled with her halfway round the world proudly bearing the Mojácar coat of arms.

Now she will have a much needed holiday, both from classes at Mojácar School and the intense sporting events that she has taken part in this year. Osaïa is now gathering strength for the next term and, of course, other sporting challenges.