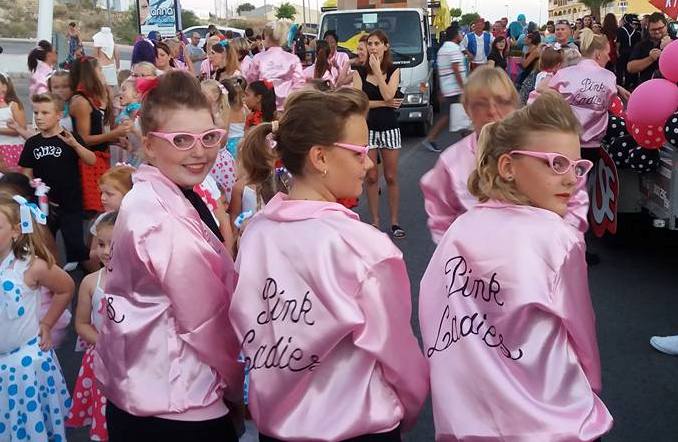 Grease was certainly the word when the girls and boys of Totally Dance took part for the 3rd time in the Benijofar Fiesta Parade.

The enthusiastic crowd were treated to a selection of music from the film as well as some iconic dance moves. The group were led by their very own Sandie and Danny followed by their ‘Pink Ladies’  Senior group sporting custom made jackets . The Mini movers and Juniors followed in their traditional 50’s style skirts with the Boys in T Bird T-shirts.

The children’s ages range from 2 to 18 years and all of the little ones made it to the end of the parade, despite the very late start time.

The crowd played a big part, cheering them on. As soon as the introduction to Grease Lightening filled the street, there were cheers of recognition, whoos and aarhs at the sights of the little ones in there costumes followed by great applause after the dance.

The organisation and  rehearsal has taken months of preparation. With well over 100 children taking part, there was a lot of shepherding to be done so not to be outdone, some of the Mum’s donned costumes, backcombed their hair and joined in the dancing at the back. The Dance Studio owner and teacher, Susan said ‘ We have always been one big family here at Totally Dance and it seemed only logical to include some of the mums this year’ she went onto say ‘The children danced brilliantly and did me, themselves and their parents proud considering it was such a long parade and a very late night’ 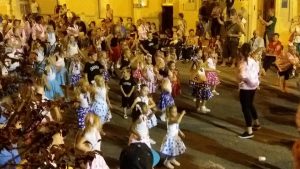 However, the Children will not be resting on their laurels with an Autumn show to prepare for in November in the Cultural Centre in Benijofar showing that they are certainly part of the village and Fiesta Parade.