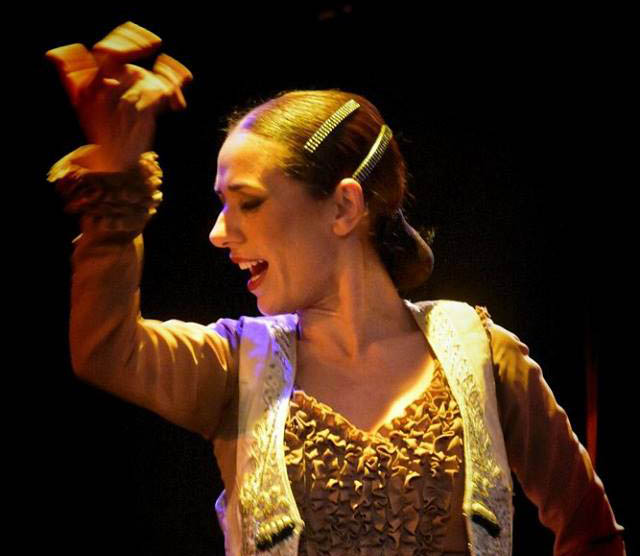 Mojácar Council has put together a full programme of summer activities, which is packed with musical as well as cultural activities to please children and adults alike.  The list of future events is available from Mojácar’s tourist offices or online at www.mojacar.es and “Turismo de Mojácar” on Facebook

As part of the wide range of entertainment offered on a daily basis to both residents and visitors, there was a highlight on Saturday 23th July at the Plaza Nueva in the Pueblo, where the curtain went up on Anabel Veloso’s Dance Company and, her “Flamencoland” show.

Premiered at the “Tour 2014 de África”, “Flamencoland” is an all-encompassing show, including music and dance, combined with innovative visual arts.

For Anabel Veloso, flamenco reaches out to forge links with the world of music, expressing people without boundaries, free-flowing souls aligning with nature and other rhythms with other cultures, to create another world – a land of flamenco!

Anabel took her first steps towards her love of this art in her native Almeria.  She later threw herself into her artistic career, first in the Centro de Danza Española y Flamenca de Rafael de Córdoba in Madrid and the Centro Homologado de Danza de La Maestra Matilde Coral in Seville, where she qualified in various disciplines.

As a soloist, she has been invited to perform at the famous tablaos (flamenco venues) “Corral de la Moreria”, “El Corral de la Pacheca”, “El Café de Chinitas”, “Las Carboneras” “Al Andalus” as well as at tablaos around the world such as “Viernes Flamenco” in Japan and “La Bodega” in Casablanca.  Anabel Veloso has also taken Andalucian culture and the name of her native Garrucha to the Embassies of three continents.

Anabel is the dancer she is today thanks to two awards made in the XVI Dance Choreography Competition in Madrid, where she gained an award for the Best Original Composition and, the Photo Award for Best Scenic Image for her first work, “El Embarcadero”.