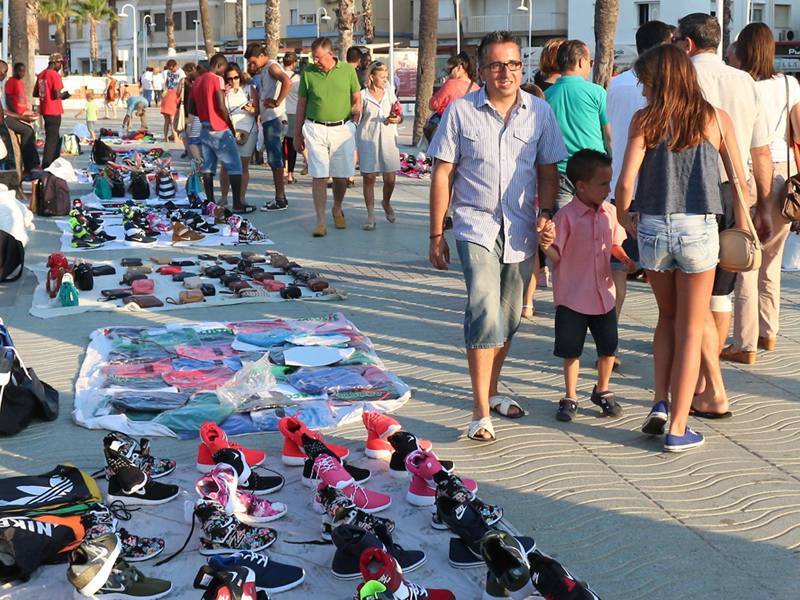 Traders at the Wednesday and Friday markets in La Mata and Torrevieja have said that a lack of police presence is encouraging the return of illegal vendors who are once again flocking in and taking up space in the streets to sell off their counterfeit goods.

They say that there have been a number of incidents recently where these blanket top vendors have been confronted by regular traders with blows exchanged and although none of the incidents have so far been particularly significant the confrontations are undoubtedly escalating and will certainly lead to a serious situation in the future.

A police spokesman said that during the summer months, particularly with the security situation as it is across much of Europe, there are many other priorities that the police have to deal with so a reduction in officers attending the markets is only to be expected.

The Councillor for markets, however, África Celdrán (PSOE), who says that she has the full support of the mayor, met with the head of the local police last week where she demanded police reinforcements for the markets to curb these problems as well as the selling of counterfeit goods. She said that many of the exchanges between the legal and illegal traders have so far been only verbal but the way the situation is developing it won’t be too long before violence is involved.

She gave the police chief several images that show evidence of illegal and unlicensed sales, which were provided by the traders themselves explaining that most of the blanket top vendors are of Senegalese origin, and they are exacerbating the situation by place their products, usually t shirts, shorts and so forth, right next to the market stalls that are dealing in legal clothing. They are also flouting the market rules as they don’t pay for the space that they occupy which enables them to offer their goods at much reduced prices.

Following the meeting the chief of police said that he will try to strengthen the police presence at the markets but the provision of additional manpower will mean reductions elsewhere. He said that that the council leadership consider it a priority that the police maintain visibility along the promenades and local beaches where illegal trading is a particular problem during the summer months and this could well be one areas from which his officers have to be diverted.

There are currently 700 traders who attend the two markets, all of whom pay a fee to the council for the pitches that they occupy. One trader said that the current situation is not being helped by the requirement for them to move to the new market site in the Antonio Soria Park. They say that they remain unconvinced by the council proposal which will inevitably see a large number of traders refusing to move.